How Do Packaged HVAC Units Work? 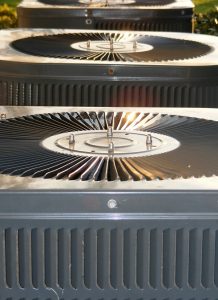 Most homes in the area utilize traditional central HVAC systems for keeping cool in the summer. Commercial systems have very different needs – starting with space, which is much larger than most homes and continuing through specific qualities of the HVAC system itself. Packaged HVAC units, which utilize a slightly different design, are a common sight in many commercial buildings, and the design can be used in residential spaces as well. Depending on your needs, thy could constitute a much better fit for you then a more traditional system.

Household central air conditioners usually follow a design known as a split system, which consists of two distinct halves. The indoor half pulls heat from the air, and then blows it through the ducts with a fan. The outdoor half releases heated air created by the process, as well as containing the compressor unit that circulates the refrigerant which makes air conditioning possible.

Packaged units – both traditional air conditioners and heat pumps, which combine the functions of a heater and an air conditioner in one – don’t separate those components into two halves. Instead, all of it is contained in a single outdoor unit. Air from inside the building is moved into the unit via an air duct called a return air duct. It can then be cooled via the air conditioning probes (which first bleeds heat from the refrigerant and shifts it to liquid form, then allows it to expand in a set of coils, which pulls heat from the air brought into the home. The cool air can then be send back into the house through a second air duct, where it joins the duct system inside the house and can be blown into the various rooms and sections.

What Are the Benefits?

Packaged units have worked well in commercial spaces because of the specific needs of those spaces, which can differ significantly from the needs of a home space. And depending on your circumstances, a traditional split system may still be the best fit for you. However, if such a system isn’t quite right for your home, a packaged unit can offer several advantages.